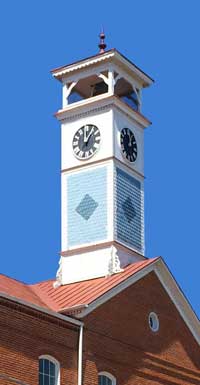 It is commonly believed that the Hermann area’s resemblance to the Rhine Valley prompted scouts from the German Settlement Society of Philadelphia to choose the site for a colony on the American frontier. Dismayed at how quickly their countrymen were being assimilated into American society, the Philadelphia Germans dreamed of building a new city on the American frontier that would be “German in every particular.”

In 1837 school teacher George Bayer, who was appointed to serve as the society’s agent, traveled to Missouri and purchased 11,000 acres of the steepest, most rugged terrain to be found anywhere on the Missouri River. It was a beautiful, if highly impractical, site for a town.

Meanwhile, back in Philadelphia city planners were mapping out a grand new city, undeterred by total ignorance of the actual terrain. On paper, Hermann was flat, with spacious market squares and sweeping boulevards. Thinking big, they made their city’s main street 10 feet wider than Philadelphia’s. The fact that the town survived at all is a testament to German determination and hard work.

Making the best of a bad situation, the Germans took their cue from Mother Nature and planted vineyards on the rocky hillsides, where wild grapevines grew with tangled abandon. A decade later, steamboats brought St. Louis visitors to Hermann’s first Weinfest, where they enjoyed more than their share of sweet Catawba wine and marvelled at the vineyard-covered hills.

By the turn of the century, Hermann’s winemakers had become wildly successful. Stone Hill Winery had grown to be the second largest winery in the country and was winning gold medals at World’s Fair competitions around the globe. The town’s numerous vintners were producing an incredible three million gallons of wine a year. In its glory days Hermann was a rollicking river port with a tavern on every corner and the largest general store between St. Louis and Kansas City.

The party ended with the one-two knockout punch of anti-German sentiment provoked by World War I and the Volstead Act of 1919. Prohibition sent Hermann reeling into the Great Depression a full decade before of the rest of the country. The only silver lining was that economic ruin meant there was no money to tear down the old buildings.

Now restored, those historic buildings have been given new life as homes and businesses. Hermann’s Old-World charm, coupled with a beautiful setting, now attract thousands of visitors annually.